The beginning: a perfect home (day 1) 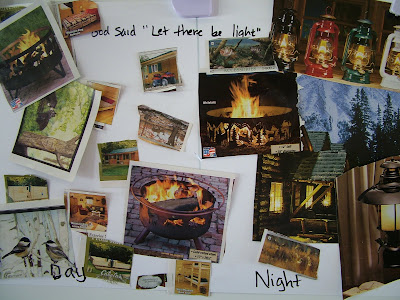 We started off our "super summer bible fun" today. The first story in "The Jesus Storybook Bible" is very appropriately about creation. The kiddos cut "day" pictures and "night" pictures out of magazines and organized them on a sheet of paper.

The point? God made the world
Posted by Sunshine at 5:36 PM 2 comments: Links to this post

Just fyi, I am going to try to have Bible Time going straight through the stories in The Jesus Storybook Bible by Sally Lloyd-Jones. I love this book because the author does a great job of showing how all the pieces of the Bible fit together, and shows God's plan from the beginning of time. On page 14 of the introduction she says "But the Bible isn't mainly about you and what you should be doing. It's about God and what he has done." The beautifully told stories are a little on the long side but they are perfect for my kiddos (age 4 and 7.) Since parents don't have a lot of time to read, my intention is to use more pictures, less words. Since this is going through the summer we will have lots of outdoor activities and water play probably. Come along with me on this adventure.
Posted by Sunshine at 11:20 PM No comments: Links to this post

Jonah and the Whale 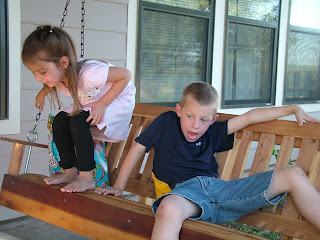 To act out the story of Jonah and the whale today, we pretended the porch swing was the ship. When the storm came the swing went rocking and swinging with great speed. Jonah had to (carefully) jump out of the boat/swing into the water/porch. Along came a big fish (mom) to swallow jonah.
Posted by Sunshine at 4:29 PM No comments: Links to this post

We read the story of Elijah getting food from the widow today. When she shared her limited supply of oil and flour, she never ran out! Alyse enjoyed acting out the story and scooping the "oil." Of course, she never tires of playing in the water. Knox enjoyed playing in the water as well.
Posted by Sunshine at 1:25 PM No comments: Links to this post

Today we read the story of Gideon. This is one of my favorite stories because it is so fun to see how God makes such a point of shrinking God's army until the Israelite win could only be attributed to God's power. I often think of this when circumstances seem impossible. If God chooses to change things then, it will be so obviously his power. After all, we are here for His glory. I had also forgotten that God had put fear in the hearts of the Midionites even before Gideon ever showed up to fight. One of the Midionites had a strange dream, and another one interpreted it saying "that means God has delivered us into the hands of the Israelites." Oh how we forget that God is always working to fulfill his purpose-- he is not limited.

We made trumpets and dropped Legos on the tile to make the sound of breaking jars. I guess it was loud enough because it scared Knox and he started crying. We also retold the story using a dry erase board. We covered it in stick figures to represent the Israelite army. Then, we erased portions of the army men as God made cuts in the army. It really helped visualize what God was doing. I guess this could also be done with a bunch of blocks or actual army men if you have any.
Posted by Sunshine at 12:54 PM No comments: Links to this post